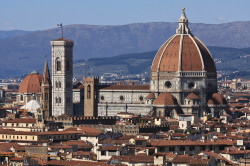 Right in the centre of Florence, in a huge square, divided into two parts (Piazza del Duomo and Piazza San Giovanni) stands out a breathtaking cathedral, spruced up with the dome that is hard to take in at a glance. Santa Maria del Fiore is the fourth-largest Catholic Church in the world. The construction of the cathedral started in 1296 with the project of Arnolfo di Cambio, on the spot where the ancient Cathedral of Santa Reparata had previously been. After more than a hundred years, in 1421s, the main part of the cathedral was completed but it still lacked the dome. The genial architect Filippo Brunelleschi won a competition to finish this work. The cathedral was opened to the faithful on April 25, 1436.

Basilica di Santa Croce – the Basilica of the Holy Cross 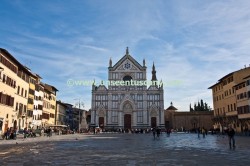 The Basilica of Santa Croce is situated on the square with the same name, near to the Arno River. It is called ‘the Italian pantheon’ as it is the burial place of the most illustrious Italians – Michelangelo, Galileo, Rossini, Alberti, Machiavelli and many other cultural, academic, church and political leaders. Here, in the Castellani Chapel, is laid to rest the Lithuanian nobleman Mykolas Kleopas Oginskis. The building of the basilica was started in 1294s by the architect Arnolfo di Cambio. Filippo Brunelleschi also contributed to the construction, which lasted until 1444. Santa Croce is considered to be the largest Franciscan church in the world. The chapel of the Pazzi family is known as the masterpiece of Renaissance, created by Brunelleschi. On the left of the church facade there is the statue of Dante. 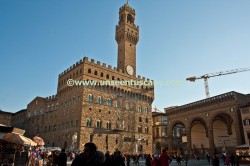 The Old Palace proudly stands in one of the oldest city squares Piazza della Signoria. From the day of its emergence in 1299, when architect Arnolfo di Cambio supervised its construction, the Old Palace was the symbol of city’s power and might. Built on the foundations of pre-existing Roman amphitheatre and houses of local dwellers (even the church was demolished but its remains can still be seen in the wall of the palace), the palace symbolised the victory of the new regime. The palace in its forms reminded a fortress with high thick walls and small windows. In the middle of the 16th century, Palazzo Vecchio fell into the hands of Cosimo I de Medici and was significantly expanded. At the same time luxurious apartments with tapestries and frescoes on the walls, and plenty specially fitted oil paintings on ceilings also appeared here. The size and the décor of the meeting room causes surprise, the statue by Michelangelo can be seen here as well.

Ponte Vecchio is one of the oldest arch bridges in Europe, built in the 13th century over the Arno River (a bridge has already existed in this place during the Roman times, about 2000 years ago). The current Ponte Vecchio appeared in the 16th century. Butchers and fish-mongers settled down here in small overhanging houses. It is said that the term ‘bankruptcy’ originated here: merchants who could not pay taxes for their stall were punished by having their table broken by soldiers. This action was named ‘bancorotto’ (English: broken table). Later the meat market was moved to another location and its place was taken up by goldsmith workshops. 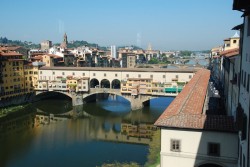 The Vasari Corridor is a passageway, connecting Palazzo Vecchio with Palazzo Pitti – the palaces that belonged to the Medici and were about 1,2 km from each other (moreover, they were on the different sides of the River Arno). The author of the corridor is Giorgio Vasari, the architect of Cosimo I de Medici. The passageway was built in 1565 in just five months for the marriage of Cosimo’s son, Francesco I to Joan of Austria. It was Cosimo I who evicted butchers from the bridge and asked jewellers to settle here (image is image).

The Pitti Palace and the Boboli Gardens 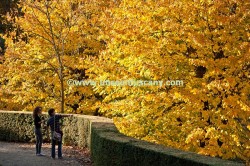 Renaissance Pitti Palace was built in 1458s at the behest of local banker Luca Pitti. His business was not going well so the family was forced to sell their residence. The latter was purchased by Cosimo I de Medici, his lovely wife Eleonora da Toledo and ten kids. The Pitti Palace was ‘doomed’ to become a residence of grand Tuscan dukes and later it was occupied by Napoleon. In the beginning of the 20th century, Italian King Victor Emmanuel III presented the palace to the nation and established here several museums.

Today Palazzo Pitti is not only an example of beautiful Renaissance palace with a large park but also a cluster of museums. In Royal Apartments there is a picture gallery which contains masterpieces by Raffaello, Tiziano, Caravaggio, Rubens, Pietro da Cortona and other masters of Renaissance. On the third floor of the palace, works of Italian artists, dating from the 18th century to World War I, are displayed. Palazzina della Meridiana contains the largest collection of theatrical costumes in Italy. The Silver Museum, located in summer apartments, houses the treasures of Medici family in addition to many other objects. 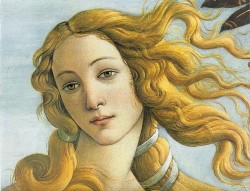 The Uffizi Gallery is one of the most famous museums in the world, storing the finest collection of paintings. Here you can see not only works by Giotto, Simone Martini, Piero della Francesca, Beato Angelico, Filippo Lippi, Mantegna, Correggio, but also the breathtaking masterpieces by Leonardo da Vinci, Raffaello, Michelangelo, Caravaggio and Botticelli. Huge Uffizi collection also includes works of other European artists: Dürer, Rembrandt, and Rubens. The museum is located in an office (Italian: uffizi) building, designed by G. Vasari in the second half of the 16th century for Cosimo I de Medici with an intention to house the governing bodies of the Tuscan Grand Duchy. 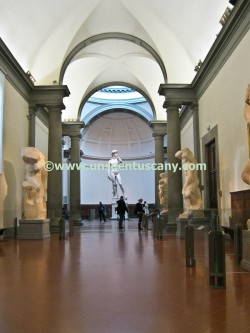 The Academy Gallery is located in the building of the Academy of the Art of Design, established in 1561, which was the first institution of its kind in Europe. Giorgio Vasari, Agnolo Bronzino, Bartolomeo Ammanati and others were the founders of the art school which became famous all over Europe, whereas Cosimo I de Medici and Michelangelo were engaged in its guardianship and sponsorship. Perhaps the most important event in the history of the Academy’s collection is moving the original Michelangelo’s statue ‘David’ to the premises of the Academy in 1873. Besides the famous ‘David’ and several other Michelangelo’s sculptures, the gallery hosts many examples of Florentine and religious art of the early 14th and 15th centuries. 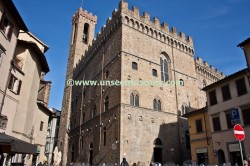 The National Museum of Bargello, that meets visitors with its severe brick walls and tower, is located in the pre-existing fortress, which housed the administrative, judicial headquarters and the prison of medieval Florentine state. In regard to the importance and size, Bargello was the second palace in Florence. At a time when justice was carried out in the palace, dead bodies were hung in windows, as an alert for those who intended to commit a crime. Now the museum exhibits a large collection of sculptures, including works by Donatello, Andrea del Verrorchio and Michelangelo. Perhaps the most famous of them is Donatello’s bronze statue of David.

The Basilica of St. Lawrence is known as one of the burial sites of the Medici family – one of the most influential families in Renaissance Europe. There are about 50 family members buried in the Basilica, tombstone sculptures of some of them were carved by Michelangelo and Andrea del Verrocchio. The first church in place of the current basilica was consecrated in Roman times, in the 4th century. In 1418 it was planned to significantly expand the church; Giovanni di Bicci de’Medici decided to create a family pantheon here and hired Filippo Brunelleschi for this work. When works were completed in the beginning of the 16th century, the basilica still lacked the facade. Medici assigned this work to Michelangelo, but this project was never implemented due to high costs. The facade remains unbuilt even today. In 1520 Michelangelo began to work on the New Sacristy and created his prominent monuments. Another work that Michelangelo began in 1523 was the Laurentian Library which had to host the collection of ancient manuscripts, belonging to the Medici family. The library was opened in 1571.