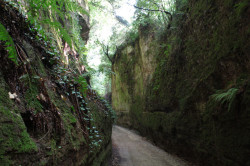 Looking for some unique and strange place for trekking in Tuscany? We have found something very special for you – Vie Cave, or the excavated roads. The Vie Cave are an impressive road network linking an Etruscan necropolis and several settlements in the area between Sovana, Sorano and Pitigliano in Maremma land (south Tuscany), consisting mainly of trenches excavated as nearly vertical cliffs in tuff, 1-4 meters width and sometimes over 25meters high. The Vie Cave you can find only in one part of the world, Central Italy!

It is difficult to say why Etruscans excavated these roads. According to the most popular hypotheses the Vie Cave were used as channels to collect the rainwater, or for security reasons. They also linked few ancient Etruscan cities and necropolis, in that way the Vie Cave probably were used as normal connecting roads.

In Roman times, the Vie Cave became part of a road system that was connected to the main trunk of the Via Clodia, an ancient road linking Rome and Manciano, through the city of Tuscania, which branched off from the Cassia road in Lazio territory.

Vie Cave of Sovana. Around Sovana, the Vie Cave wind around and towards the archaeological area of the town, then reconnecting with those from Sorano and Pitigliano.

Vie Cave in Sorano. The zone of the Vie Cave that gives more possibilities for trekking in Tuscany is based around Sorano. The Vie Cave begin coming out of the Porta dei Merli, and descending into the valley of the river Lente. The Via Cava of San Rocco was on the opposite side of the Sorano county, along the ruins of the church of San Rocco, religious building of the Romanesque art that retains parts of the original wall of the via. Behind the ruins of the church there is a vast Etruscan necropolis with tombs hewn into the tuff. Near Poggio San Rocco and Poggio Croce there are also numerous Etruscan tombs and a columbarium, which are as rock-cut cells arranged in several rows one above the other. From Middle Ages on these ancient tombs became a shelter for pigeons.

Vie Cave of Pitigliano. Around Pitigliano there are several Vie Cave, including the one directed towards the archaeological area of Sovana.

Our best choice is Via Cava and necropolis of San Sebastiano (Sorano). This Etruscan road makes an impression on us because of the charm of the surrounding countryside and is characterized by vertical cliffs and narrow path. Don‘t forget comfortable shoes for your unforgettable trekking in Tuscany!

More information about the Vie Cave and trekking in Tuscany www.leviecave.it (only in Italian…).