Things to do in Florence: parks and gardens 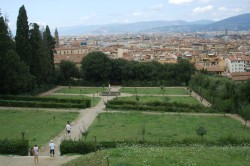 Boboli Garden (Giardini di Boboli) is a park in Florence, that is home to a collection of sculptures dating from the 16th through the 18th centuries, with some Roman antiquities. It is the MUST in your list of things to do in Florence. Access via Pitti Palace.

Bardini Garden (Giardino Bardini) is an Italian Renaissance garden in Florence. Opened only recently to the public, it is relatively little-known. The garden boasts many statues and panoramic views over the city. Certainly should be in your list of things to do in Florence during the spring, when wisteria is blooming.

Cascine Park (Parco delle Cascine) is a monumental and historical park in the city of Florence. The park covers an area of 160 hectares It has the shape of a long and narrow stripe, on the right band of the Arno river.

Fortezza Gardens ( Giardini della Fortezza) are located on the east side of the Fortezza da Basso in Florence, between the ramparts and the avenue Filippo Strozzi. should be in your list of things to do in Florence if you like flea markets (third weekend of the month).

Gherardesca Garden (Giardino della Gherardesca). The garden is the largest private garden in the historical center of the city.

Torrigiani Garden (Giardino Torrigiani). The garden is situated between Via de ‘Serragli, via the Campuccio and the section of wall that runs along the boulevard Francesco Petrarca. It is a large park with a building called the Casino Torrigiani Campuccio.

Iris Garden (Giardino dell Iris). The Giardino dell’Iris is a botanical garden specializing in the cultivation of iris flowers, symbol of Florence since 1251. It is located on the corner of Viale dei Colli and Piazzale Michelangelo in Florence, Italy, and open daily without charge from May 2-20 every year.

Rose Garden (Giardino delle rose) is a park in Florence Oltrarno. Located between Viale Poggi, Via di San Salvatore and Via dei Bastioni, it offers a great view of the city. The garden is opened all the year, from 9am to sunset.