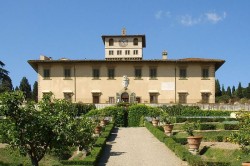 The Medici villas are a series of rural building complexes in Tuscany which were owned by members of the Medici family between the 15th and the 17th centuries. In 2013, the Medici villas were added to UNESCO’s World Heritage list. The villas served several functions: they were the country palaces of the Medici, scattered over the territory that they ruled, demonstrating their power and wealth. They were also recreational resorts for the leisure and pleasure of their owners.

Twelve villas and two gardens spread across the Tuscan landscape make up this site which bears testimony to the influence the Medici family exerted over modern European culture through its patronage of the arts. They represent an innovative system of construction in harmony with nature and dedicated to leisure, the arts and knowledge.

Villa Medici in Fiesole (from 1450). It is located on a steep slope overlooking the Arno Valley. by appointment (annamarchimazzini@gmail.com).

Villa La Petraia (from first half of the 16th century). It is considered one of the most beautiful and celebrated Medici villas, situated in a panoramic position overlooking the city of Florence. OPEN.

Villa di Cerreto Guidi (from 1555). The villa is one of the few Medici villas to be permanently opened as a museum, housing since 2002, the Historical Museum of the hunt and territory. OPEN.

Palazzo di Serravezza (from 1560). Located in the foothills of the Apuan Alps, it looks out over a farming landscape. OPEN ON FRI-SAT-SUN.

Villa La Magia (from 1583). Villa La Magia and the historic garden, with the contemporary art park, are open for visits. OPEN ONLY THE GARDEN, VILLA BY APPOINTMENT (info@villalamagia.com).

Villa di Artimino (from 1596). The villa also known as hundred chimneys villa, is situated on a hill opposite to that of the small medieval village of Artimino. by appointment (055 875141).

Giardino di Boboli (from 1550). Designed as a princely garden and theatrical place to complement the Pitti Palace, it is now part of the Historic Centre of Florence. OPEN.

Giardino di Pratolino (from 16th century).Parco di Pratolino belonged to an ensemble started in 1568 by the Medici family. Covering 24 hectares, it is located on the eastern flank of Monte Uccellatoio. The original villa no longer exists. OPEN IN APRIL-OCTOBER, ON FRIDAY-SUNDAY.