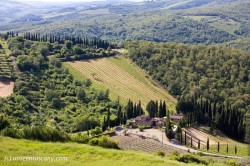 Today on our Chianti Guide we want to preset the graceful Radda in Chianti village, lying deeply hidden in hills, attracts many tourists, wine and nature lovers. Along the devious road leading to Radda in Chianti there are many ‘wine farms’ (Italian: fattoria – literally ‘a farm’) situated, and in green groves you will easily see the roe deer curiously observing tourists. Radda, the capital of the Chianti Classico wine, is situated on a hill between the valleys of Arbia and Pesa. This settlement has been known since the 9th century and it was first mentioned in written documents in 1002.

The centre of Radda in Chianti is very small – there is only one street, but there is still much to see. And narrow side streets promise you not only the plenitude of wine-cellars and local food shops, but a lot of surprises (for example an ancient tunnel under dwelling-houses). Noteworthy is Palazzo del Podestà, the palace of the 15th century, with its facade, embellished with the coats of arms of the families that dominated in the area. In the main square you can find the church of San Niccolò and quite nearby there is Ghiacciaia Granducale (English: the Ice House of the Grand Duke) – a special room to store snow and produce ice. In Franciscan monastery you can visit Museo d’Arte Sacra del Chianti (English: the Museum of Sacred Art of Chianti).

The environs of Radda in Chianti are full of luxurious ancient villas, castles and chapels. One of the most beautiful sights to visit is the perfectly extant medieval castle Castello di Volpaie and the Romanesque church of Santa Maria in Prato.

Around Radda there are hundreds wine farms located among soft hills completely covered with woods and extensive vineyards that produce a great part of the wine made in the whole Chianti region and several wonderful Castles like Monterinaldi, Montevertine and the unique jewel of Volpaia Castle. One of the most interesting and important events in Radda in Chianti is a wine festival called „Radda nel Bicchiere“ during which it is possible to meet local wine producers and to taste best chianti classico wines. The event is held ones a year, usually on the first weekend of june.