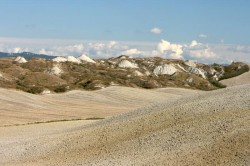 The Accona Desert (It. Deserto di Accona) is a semi-arid area in Tuscany, in the center of the so-called Crete senesi, in the west and the south of the comune of Asciano. It is characterized by calanques and dome-shaped formations locally known as biancane (deriving from Italian bianco, white, due to their light shade).

According to the Peveril Meigs classification this is a semi arid landscape due to the low rainfall which is less than 600 mm yearly. Consequently vegetation is scarce, instead there is a lunar like landscape. The area has carried this name since the middle ages and was depicted in the frescos of Buon Governo di Siena.

The imposing Abbey of Monte Oliveto Maggoire was built on the southern border of Deserto di Accona in medieval times and was destined to be a hermitage. 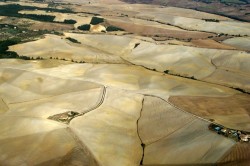 The Abbey of Monte Oliveto Maggiore is a large Benedictine monastery, 10 km south of Asciano. Its buildings, which are mostly of red brick, are conspicuous against the grey clayey and sandy soil—the Crete senesi which give this area of Tuscany its name. It was founded in 1313 by Bernardo Tolomei, a jurist from one of the most outstanding families in Siena. 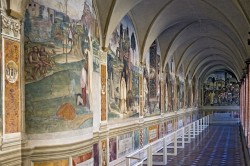 The Chiostro Grande (“Great Cloister”) has a rectangular plan and was realized between 1426 and 1443. On the oldest side it has a two-storey loggia and a pit, dating to 1439. Under the vaults of the cloister are frescoes of the Life of St. Benedict painted by Luca Signorelli and il Sodoma, considered amongst the most important Renaissance artworks in Italy.

The frescoes disposition follows St. Gregory’s account of Benedict’s life. Signorelli’s paintings were executed in 1497-98, while Sodoma’s date to 1505 afterwards.