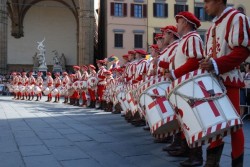 New Year is the time at which a new calendar year begins and the calendar’s year count is incremented. In many cultures, the event is celebrated in some manner. The New Year of the Gregorian calendar, today in worldwide use, falls on 1 January, as was the case with the Roman calendar. But there are numerous calendars that remain in regional use that calculate the New Year differently!

On March 25th, Florence celebrates the Florentine New Year’s Day (it. Capodanno fiorentino). Until 1582 for all of European Christianity, the new year did not start on the 1st of January, but on the 25th of March, the day of the Incarnation of the “Verbo divino” and the moment of the announcement of the maternity given by the Archangel to the Virgin Mary.

The Florentine New Year is still loved and celebrated today. It might be better to say re-celebrate, seeing that the Community of Florence re-introduced it from the year 2000 amongst their festivities and celebrate it with the traditional Fair in Piazza Santissima Annunziata (where the basilica dedicated to the Saint Virgin is found and inside the church a so-called miraculous fresco representing the Annunciation by the painter Fra Bartolomeo). In addition, every year on March 25th a historical procession takes place at around 3:30 p.m., starting from Palagio di Parte Guelfa, moving around all afternoon and finishes at the same piazza. 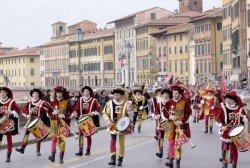 In Pisa, the New Year is celebrated twice – not only on the 1st of January along with the rest of the world, but also on the 25th of March.
The Pisans have not forgotten their traditions, and each year they mark the beginning of the year as was their custom between 1200 and 1749, when New Year’s Day coincided with the Annunciation, nine months before Christmas (Anno Pisano ab Incarnatione Domini).
Today, just like then, the beginning of the Pisan Year is marked by a sort of solar clock, a physical phenomenon that is as simple as it is spectacular and intriguing: at midday sharp, a ray of sunlight penetrates the Duomo through a round nave window, landing on a marble egg on a shelf surmounting a column next to the pulpit of Giovanni Pisano, on the opposite side.

The event is preceded in the morning by a historical parade and a religious ceremony that ends at exactly 12 noon.