Carnival of Viareggio – This is What You Really Haven’t Seen Before! 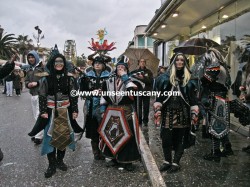 Each year almost a month before the beginning of Lent, carnival fever grips Italy. Perhaps the most famous of them is Venetian carnival charming with its history, mysteries and colours. Meanwhile, in Viareggio on the Mediterranean coast takes place another spectacular, colourful and grotesque carnival, lesser-known to travellers, full of humour and even sarcasm.

The Viareggio Carnival tradition has started nearly 140 years ago, when a few rich local citizens decided to dress up in colourful costumes and to protest in the city streets against excessive taxes. However, the costumes were not the end – young men organised a huge march which was attended by hundreds of town-dwellers and special moving platforms with figures, which reflected contemporary topicality. This gave birth to the tradition of carnival, preserved till the present day – to talk witty, sarcastically, grotesquely about today’s issues.

In 1925 the participants of Viareggio Carnival decided to employ papier-mâché (the mixture of paper scraps and glue) technique for masks and satirical moving characters. That is how ecological philosophy of the Carnival appeared – to use secondary raw materials for the production of platforms and characters and thus to contribute to the promotion of waste sorting. 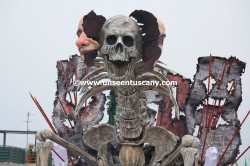 Due to incredible creativity and efforts of citizens, every year many allegories made of old newspapers, boxes and crates, clay, gypsum and reeds appear in Viareggio city, mesmerizing the audience from all over Italy. Craftsmen of papier-mâché, engineers, and designers work in their workshops during the fall and winter in order to present a holiday to the Mediterranean coast in spring.

For detailed information on events and tickets please contact info@unseentuscany.com