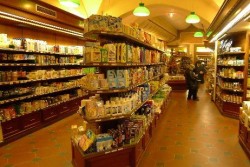 Pegna. Pegna is one of the most well-known shops in Florence. In the heart of Florence, a stone’s throw away from the magnificent cupola of the Cathedral, Pegna is the shop in which to find – in a hospitable and prestigious enviroment – something by which to remember Florence and Italy, even at the table: confetionary, wines, cheeses, delicatessen items and many many other delicacies. Here, in fact, it will not be difficult to find something from your own country. 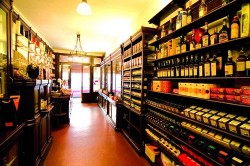 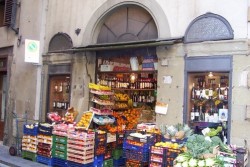 Vettori Frutta e Verdura. The fruit and vegetable store established by Mr. Giuliani in 1910 is situated in a sixteenth century palazzo that forms a wedge separating Borgo S. Jacopo from Via dello Sprone. The store pecializes in early produce and typical Tuscan specialties including a large assortment of salad greens and radicchio. The outdoor display of fruits and vegetables is a colorful background for the many snapshots visitors take of the famous “mask” fountain. 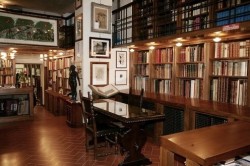 Libreria Antiquaria Gonnelli. Libreria Antiquaria Gonnelli is founded in 1875, it is one of the oldest bookshops in Italy specialized in antique books. The bookshop was a venue for intellectuals (from Gabriele D’Annunzio to Giuseppe Prezzolini); and the annexed room, which still hosts exhibitions and cultural events, housed the first exhibitions of works by De Chirico and Rosai. 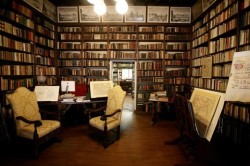 Libreria Oreste Gozzini. On the opposite side of the street, at no. housed in the historical Palazzo Alfani is the Libreria Oreste Gozzini, moved to the current site in 1959 but already operating in the mid-19th century. Frequented by bibliophiles, this bookshop sells ancient books on history, art, and literature, as well as law and economy texts. 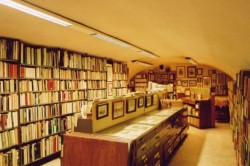 Libreria Giorni. Libreria Giorni, a very illustrious shop whose large collection of used books with a variety of arguments and musical scores, also conserved texts the regime did not approve of during the fascist period. From the 50s onwards they also sell prints, both original ones and reproductions. 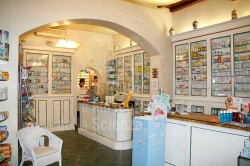 Farmacia dei Serragli. Founded around 1880, the pharmacy occupies the ground floor of a building on the corner between Via della Chiesa and Via dei Serragli. It has retained its original furnishings which, ordered by the proprietor of the time, Dr. Dylan, from a craftsman at San Casciano, consist of a set of sober wooden cabinets, enamelled in white trimmed in green, that run along three walls in the sales area and the adjacent room. 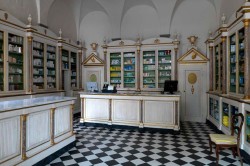 Antica Farmacia S. Spirito. Palazzo Dati houses Farmacia S. Spirito, established in 1908. According to records, the owner of the building was one of the most renowned speziali in Florence, Anton Francesco Grazzini. The 20th-century furniture, consisting of white glass-fronted shelving with columns and corbels surmounted by small porcelain vases, has recently undergone long and complex restoration work. 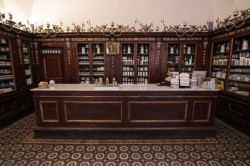 Farmacia SS. Annunziata. Records prove the existence of the Farmacia SS. Annunziataas far back as 1561. It was a ‘speziera’ (a natural remedy workshop) managed initially by the Benedictine nuns of S. Niccolò and later by the ‘speziale’ (the pharmacist of ancient times) Domenico di Vincenzo di Domenico Brunetti, registered in the Book of the Physicians and Pharmacists Guild from 1588. The original furnishings date from the 18th century.