Surroundings of Pisa in Summer

Pisa is so much beyond the Leaning Tower and Piazza dei Miracoli – the surroundings of Pisa in summer (beyond the city itself) offers interesting summer activities. Some of our ideas for your unforgatable holiday in Tuscany!

The Natural Park of Migliarino-San Rossore-Massaciuccoli is really close to the Leaning towe and extends over a territory of circa 24.000 hectares; in an area once inundated by marshlands and lagoons that have, with time, been covered by debris brought by the river Serchio and more importantly by the river Arno. If you enjoy walking it can be reached by foot, otherwise by car or by train (the closest train station is Pisa San Rossore. San Rossore is known for its hippodrome where racecourses take place. In San Rossore you also can see the “Mucco pisano”, a large and local cow! 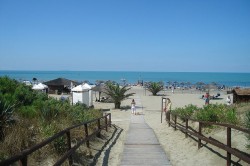 Do you like sandy beaches, dancing and having a drink with friends? The Pisan coast is ideal for these things! Tirrenia is a of Pisa, immersed in the pine forest. Tirrenia is situated in the center of the coast of Tuscany and the Parco Naturale Migliarino, San Rossore and Massaciuccoli, between Pisa and Livorno. The town is surrounded by sand hills and lush forests, whose fauna include wild boars.In between Marina di Pisa and Calambrone, Tirrenia is a goal of Italian seaside tourism and, more in general, European. The long, sandy beaches here can be accessed free, or you can pay to go to a full service bathing establishment. There are lots of pubs and clubs. Theme parks near to Tirrenia: Sunlight Park, Ciclilandia, Fantasilandia, Luna Park, Parco Giochi Mattera Gian Carlo.

The jewel not to be missed in Tuscany is located in the Pisan hills: San Miniato. The medieval village of San Miniato sits at an historically strategic location atop three small hills where it dominates the lower Arno valley between the valleys of Egola and Elsa. In medieval times, San Miniato was on the via Francigena, which was the main connecting route between northern Europe and Rome. It also sits at the intersection of the Florence-Pisa and the Lucca-Siena roads. Over the centuries San Miniato was therefore exposed to a constant flow of friendly and hostile armies, traders in all manner of goods and services, and other travelers from near and far. Ipreserves a historic centre set on the hilltop with the Cathedral, the Episcopal Palace, the Municipal Palace and the dominating Tower Fortress. It is famous for its truffles – at the truffle fair in November, truffle hunters, chefs, experts and journalists come to taste the local gastronomic speciality, but it is also worth a visit in the summer.

Pisan Hills and the Wine Route 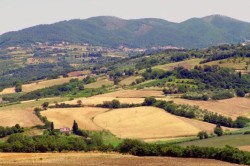 If you want to discover the real province of Pisa, head for the Pisan hills with its artistic, cultural and gastronomic treasures. Such villages and towns are to be found on our Pisan Hills Wine Trail: San Miniato, Palaia, La Rotta, Peccioli, Laiatico, Terricciola, Lari, Crespina, Fauglia, Lorenzana, Casciana Terme and Chianni. Visitors travelling by car or by bicycle along the winding, panoramic roads come across towns and villages awash with history and culture, romantic hamlets and impressive farmhouses, to discover the wine producers and shops, local produce and high quality food shops. It‘s worth to chase the Wine Route of the Pisan Hills. This route is a trail that winds around the hills of the Valdera and lower Valdera. 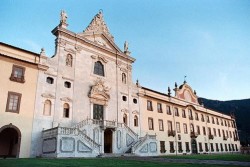 Calci is a charming village that lies at the foot of Monte Pisano and only is 10 kilometres away from Pisa, in the middle of a beautiful valley called Valle Graziosa, dotted with convents, olive trees, churches and chestnut woods. It is known for its Certosa, a Baroque-style monastery founded in 1366. The Certosa di Calci is a monumental complex used by Carthusian monks until the 1970s. Now, it is open to tourists who can visit the large internal courtyard surrounded by buildings, the cellars, the orchards and the wing of the complex that hosts the Natural History Museum of Pisa University. Visitors won’t want to miss a trip to the Church of San Giovanni e Ermolao, founded in 1116. It features a beautiful baptismal font, which is one of the most important examples of neo-ancient sculpture in Pisa and Lucca.