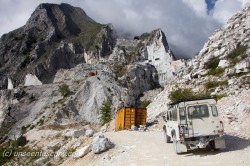 Carrara marble quarries are situated nearby the city of Carrara in the province of Massa-Carrara in the Lunigiana, the northernmost tip of Tuscany. Carrara marble is a type of white or blue-grey marble of very high quality, popular for use in sculpture and building decor.

Carrara marble has been used since the time of Ancient Rome. Huge blocks of marble were loaded onto ships and were then transported from the port of Luni to Rome. The marble was used for the decorations of the roman temples. The real breakthrough in marble quarrying came in the 16th century with the advent of explosives. During the Renaissance marble was used by Michelangelo for his sculptures, the artist came personally to select the blocks of marble for his works (for example for the David, the Pietà and the Moses).

In the 17th and 18th centuries, the marble quarries were monitored by the noble Cybo and Malaspina. At the end of the 19th century, Carrara became the cradle of anarchism in Italy, in particular among the quarry workers. Many of them were ex-convicts or fugitives from justice. The work at the quarries was so tough and arduous that almost any aspirant worker with sufficient muscle and endurance was employed, regardless of their background. In the middle of the twentieth century Carrara marble has been loved by fashists: Mussolini even gave the marble of Carrara for one of the two mosques of the Temple Mount in Jerusalem.

The quarries are places where for many centuries marble was quarried. There are two types of marble quarries: closed and open. There are currently about 270 active Carrara marble quarries, and in these quarries the world’s most advanced technology is used. Yet although there are hundreds of Carrara quarries, only a few yield the top quality marble so prized for its colour and texture. The best marble is „hidden“ very deep in the mount, and it is pure white and has a perfect texture.

UnseenTuscany.com author Federico Baglini joined Carrara Marble Jeep Tour. Carrara Marble Tour offers off road 4×4 trip in the stunning scenery of the Carrara marble basins, where some scenes of the James Bond Quantum of Solace film were shooted in 2008. This tour is a unique possibility to see stunning places usually inaccessible to most visitors and discover the world of Carrara‘s marble.

The itinerary starts at Fantiscritti parking place. The professional driver of 4X4 off road vehicle (up to 9 seats) brings you up through a steep marble road connecting a net of 30 open-air active quarries at an altitude of almost 1000 m above the sea level. Here you can admire a breathtaking view over the entire Apuan-Versilian coastline. Inside the quarrying site, our tour guide gives information about both ancient and modern methods of excavation of marble.