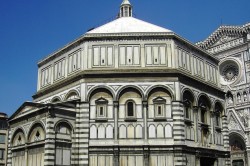 June 24th is a special day for Florence – it’s Saint John Feast Day, the patron saint of the city, the saint to whom the Baptistery is dedicated, and during the day there are different events around the city celebrate it! Every year, on June 24th, Florence celebrates the feast of its patron, San Giovanni, with a series of exhibitions that involve the entire city. 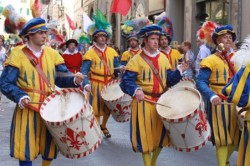 St. John the Baptist has been the city’s Patron Saint since the time of the Lombard times. Florentines probably chose this particular saint because the previous protector of the city was the warlike god Mars, and courageous St. John must have seemed a worthy substitute. Secondly because his teachings were short, simple and to the point. Upright and inflexible, St. John was thus the ideal protector for a comunity whose wealth was based on commerce and to whom reputation was like ready money.

So St. John the Baptist feast begins on the morning of June 24th: the traditional offering of a candle for St. John has survived to this day. The Historic Parade starts from Piazza della Signoria and continues towards the Baptistery of the Cathedral with an offering of candles for the patron. After the parade, a solemn mass follows with the exposure of the Saint’s relics. 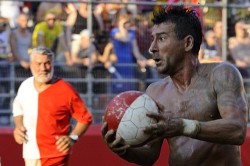 In the afternoon of June 24th, it’s time for one of the most popular events linked to the Feast of St. John the Baptist is the Calcio storico fiorentino, also known as “historic Florentine soccer,” which is held in Piazza Santa Croce. After a long parade from Santa Maria Novella one of the most traditional piazzas of Florence, Santa Croce, becomes the “stadium” where you can watch the Historic Florentine Soccer born in the 16th Century.

The game is more like rugby or American football than its modern counterpart, with rules that appear to be practically non-existent: anything goes from kicking to punching and blows below the belt as long as the players can score a “caccia”, or goal. It is very interesting that only rich aristocrats used to play this game. Today “Calcio Fiorentino” is more of a show than a real game, with a parade before and after the game. 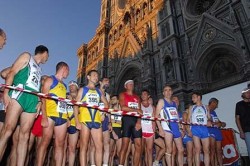 Nocturnal „San Giovanni” is an annual 10 km run taking place at night through the historic streets of Florence on June 22th. The race starts at 9.00PM in Piazza Duomo; finishing point is in the splendid scenery of Piazza S. Giovanni on the parvis of the Cathedral. If you feel 10km is too much you can opt for a reduced non-competitive 4 km route.

At the conclusion, on the evening of the 24th, there is a traditional fireworks display in Piazzale Michelangelo called fuochi di San Giovanni (St John’s fireworks). 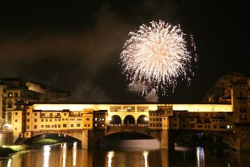 The traditional fireworks over the Arno date from the 17th century and replace the festive fires that were lit for the summer solstice and later became a feature of St. John’s Day.

The fireworks normally begin at 10 pm, and we recommend you arrive a little bit earlier to find a nice spot from which to enjoy the show! (the Arno River banks are normally really crowded!). Some people arrive at 7pm, the best spot is at Ponte Santa Trinità or Ponte alla Carraia.

St John’s Day is a public holiday in Florence, Genoa and Turin so many businesses and public offices are closed.