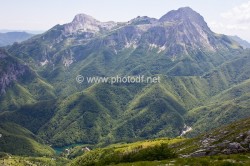 First weekend of June our team has visited Garfagnana – one of the best places for trekking in Tuscany, but less-visited by tourists. The Garfagnana is a historical and geographical region of central Italy, today part of the province of Lucca, in Tuscany. It is the upper valley or basin of the river Serchio, and thus lies between the Northern Apennines’ main ridge to the north-east and the Alpi Apuane to the west. Garfagnana offers the best hiking paths in the region. The territory is also rich in history and gives the chance to discover ancient castles, imposing fortresses and spectacular medieval villages. Its culinary specialties (spelt, chestnut, mushrooms, cheeses or hams) are delicious and well known. 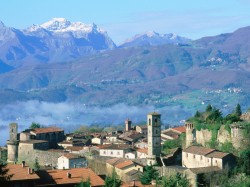 Castelnuovo di Garfagnana is located at the confluence of the Serchio and the Turrite Secca rivers, close to the intersection of roads passing through the Apennine Mountains and the Apuan Alps. The main sights of the town are: The Rocca Ariostesca (Ariosto’s Castle), dating to the 12th century and enlarged by Castruccio Castracani in the following century, the Duomo of Sts. Peter and Paul, erected in the 16th century, the Capuchins’ Convent and Fortress of Monte Alfonso, built in the late 16th century. 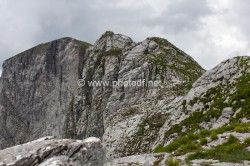 Monte Sumbra (1765 m) is a limestone mountain at the southern end of the Alpi Apuane. There are two routes to Monte Sumbra. First one is a short ferrata of dubious quality through the south-west face starting at Passo Fiocca and the east ridge, a wonderful balancing act above the abyss of the south face. The second one is the recommended normal route with limited difficulties. The ridge is a very blunt knife edge but for one spot, where a small peak has to be climbed where, however, you need all your skill and courage. While the real attraction of Monte Sumbra is the ascent along the east ridge itself together with the south face views, the mountain also is an excellent look-out point. The Alpi Apuane are famous for their marble and at the base of Monte Sumbra’s south face you can find several of them. 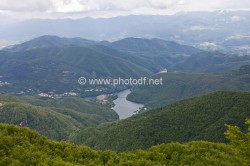 Vagli lake and the “ghost town”

Lago di Vagli lake was created in 1953 after the construction of a dam. It houses a depopulated “ghost” village, the Fabbriche di Careggine, which becomes reachable when the basin is emptied for maintenance. The population was transferred in new residences built in the nearby Vagli Sotto. The lake was emptied in 1958, 1974, 1983, 1994, there unofficial information that it will happen again in 2016. 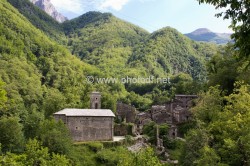 The old village of Isola Santa

Isola Santa (or Saint Island) is a small village located in the Apuan Alps, 550 meters above sea level. It is believed that the village was founded as a hospice in the Middle Ages, on the road linking the Garfagnana Versilia. The village during the ages was abandoned, then was partially renovated in recent years. In the village there is an ancient church dedicated to St. James, constructed in 1260 and now deconsecrated. The village overlooks a dam (built in 1948-49), which partly submerged the ancient settlement.

Book your hotel in Tuscany by clicking the link below.