Trekking in Tuscany: Paths Near Florence 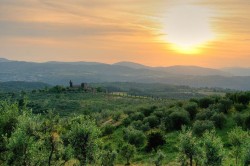 If you are planning trekking in Tuscany, we have some interesting paths near Florence. You shouldn’t miss Reggello aera and Vallombrosa forest with its wonderful nature. Reggello aera is located about 25 kilometres southeast of Florence. The most famous point of interest is the Abbey of Vallombrosa, located in the middle of green forest and mountains. Vallombrosa is also a perfect place for a day of relax after intensive visit of Florence, the most famous art city in Tuscany. Trekking in Tuscany and paths near Florence, in Vallombrosa forest, will show you another, the unseen side of Tuscany.

The forest of Vallombrosa is one of the most pleasant places where to wander when hot summer days are to tiresome: the altitude and the thickness of its woods guarantee excellent walking possibilities. The forest covers an area of 1,279 hectares, between 450 and 1450 m above the sea level. The most common species in the forest are chestnut trees, oaks, maples and hornbeam fir, beech, the Corsican pine and Douglas fir. 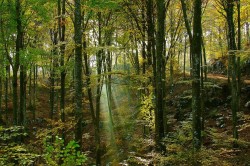 Walking path Macinaia. This easygoing walk, along a forestry road, is waymarked as CAI 12. From Vallombrosa, take the downhill road towards Saltino, until the Chapel and Fountain of S. Caterina: from here a wide forestry road branches off. Follow this road keeping the left, first amidst conifers and then beech woodland, which is particularly suggestive after a snowfall. The route passes by a house, named Macinaia (1313 m); from here the forestry road to the forest of S. Antonio branches off. Do not take the latter and continue uphill, till you meet the road along the ridge, quickly leading to the mountain hut “Giuntini”, on Monte Secchieta (1418 m). The summit of Monte Secchieta (1452 m) is military zone and can not be accessed.
Walking path to Monte Secchieta. The 500 meter elevation gain between the Abbey of Vallombrosa (958 m) and the summit of Monte Secchieta (1418 m) are covered by a steep path, suitable for fit walkers only. From the back of the Abbey, take path CAI 9. Initially, this path follows the old “Holy Steps”, the old pilgrimage itinerary to the Hermitage of the Paradisino of the Paradisino, after reaching two chapels (S. Giovanni Gualberto’s Rock and the Chapel of the columns). After crossing a tarred road in the vicinity of a source, the path gets steeper and steeper through fir first and beech woodland later, eventually reaching the mountain hut Giuntini. To return, if you are not short of time, we recommend to take Itinerary 1 which allows to complete a loop through the forest.
Walking path in the northern section. This route shares the first section of Itinerary 2, until the hermitage of the Paradisino. From here, follow a forestry road running a few meters below the tarred road heading north. The route is not waymarked but well evident and for a short stretch runs along the tarred road itself. Once at Poggio Stefanieri (1143 m), cross path CAI 8 without taking it and take instead an easy downhill forestry road slowly bending left through a century old Douglas fir wood and eventually leading to a house (“Casa del Metato”, 980 m). From here, always bearing left, take another forestry road that, in less than two kilometres, leads to the tarred road linking Vallombrosa to the pass of the Consuma. After 500 meters along the paved road towards Vallombrosa, to the right is the rock hiding the chapel of the Evil’s rock, with one of the most suggestive views in the area. From here it doesn’t take long to get back to the abbey. 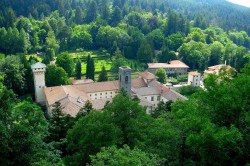 Vallombrosa is a Benedictine abbey in the comune of Reggello, about 30 km south-east of Florence, surrounded by forests of beech and firs. It was founded by Giovanni Gualberto, a Florentine noble, in 1038 and became the mother house of the Vallumbrosan Order. It was extended around 1450, reaching its current aspect at the end of the 15th century. In 1529, after the looting of Charles V, the east tower was built, in the 17th century followed the wall and in the 18th century the fishing ponds. Today, the monastery is open for tourists.

You can also stay at the “La Foresta” hotel, situated in unique and uncontaminated surroundings in the Vallombrosa Biogenetic Forest.