Week’s Place: Abbazia di San Galgano and the sword in the rock 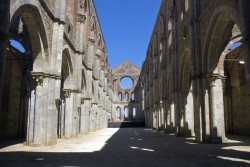 Today, in the rubric ‘The Place of the Week’ we invite you to San Galgano Abbey near Siena. Preparing for the trip around Siena, a question might arise – what unusual is here to discover if intimate villages and undulate hills are already visited? While travelling around Siena localities, it is simply a must to stop by this legendary place and to see a real sword in a rock.

The Abbey of San Galgano, surrounded by wild nature, located in the commune of Chiusdino, approximately 30 km from Siena, attracts tourists due to 3 main reasons: a remarkable beauty of architecture, open-air opera festivals and the wonderful sword in the rock.

One of the most famous English legends is about Arthur, who pulled the sword out of the rock and became the king of England. The legend was written around 1200 by Robert de Boron. The legend is legend, whereas the real sword stuck in the rock can be found not in England but in Tuscany, in a small chapel on a hill next to the Abbey of San Galgano. 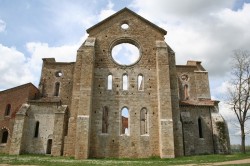 It is believed that San Galgano or Saint Galgano, was a recluse knight, born in 1148 in the village of Chiusdino. The life of this character is covered by legends and stories; actually, there is even a lack of evidence of his existence. It is said that San Galgano was an arrogant young man until the Archangel Michael appeared to him, showing him blooming fields with flowers, 12 mysterious men (supposedly – the twelve apostles) and a book (supposedly – the Holy Grail). Once, while riding a horse around the neighbourhood, Galgano recognized the place he had seen in his vision and stuck his sword here, on the top of the hill of Montesiepi, thus renouncing his life of a knighthood full of violence and became a hermit. It is believed that Galgano died at the age of 33 and was buried next to the sword stuck in the rock.. A few years later he was canonized. The head of the Saint was re-buried in the church of Chiusdino where it can be seen even today. 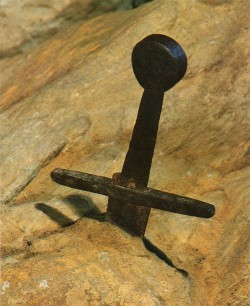 In 1189 monks built the chapel ‘Rotonda della Spada’, so the sword appeared inside it and is kept here till nowadays. Finally, in 1218 the construction of the remarkable Gothic Abbey of San Galgano started. In the middle of the 13th century, the Abbey, built in honour of San Galgano, was an eye-catching Gothic pearl – a sanctuary with an overall length of 71 meters and width of 21 meters. 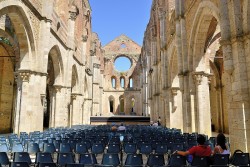 In summer San Galgano invites visitors to the Opera Festival. This is one of few opportunities to hear ‘Aida’, ‘Carmina Burana’, ‘The Barber of Seville’, ‘The Divine Comedy’, Vivaldi’s ‘Four Seasons’ and many other classic works. Usually, the shows are held in the famous roofless building of San Galgano Abbey, surrounded by medieval masonries, under a star-filled sky. It would be really difficult to create yet more special atmosphere!