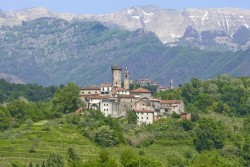 During the Middle Ages, there were 160 castles in Lunigiana, only thirty of which have reached our times in a good state of preservation while others have fallen into ruin. The historical origins of these castles date back to times when the Lombards dominated most of the Pianura Padana and, seeking an outlet on the Ligurian-Tuscan coast, they found in the Cisa Pass and the Cerreto Pass, near the town of Fivizzano, the easiest ways to cross the Apennines.

Castello di Piagnaro, Pontremoli. The Piagnaro Castle, one of the most impressive castles of Lunigiana, is situated on a hill overlooking the village of Pontremoli, strategically located along the Via Francigena. Inside there is the Museo delle Statue Stele.
Open to visitors. Info: www.statuestele.org 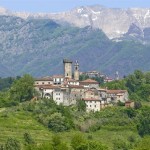 Castello di Malgrate. The Malgrate castle was for centuries at the centre of military campaigns undertaken by the Malaspina family. Occupying a strategic position linked to Bagnone, Filattiera and Villafranca, it was destroyed and rebuilt many times until finally it was transferred to the Duke of Milan.
Open to visitors. 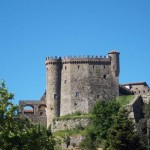 Castello di Fosdinovo-Malaspina. Solid and majestic, the Malaspina Castle of Fosdinovo dominates the entire landscape among the Apuan Alps, the Lunigiana and the sea. The various stages of its construction are easily recognisable. In excellent conditions, it is privately owned, and is open to the public.
Open to visitors. Bed & Breakfast. Info: www.castellodifosdinovo.it 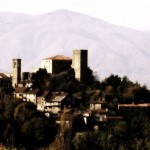 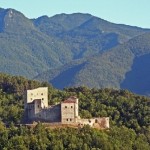 Castello dell’Aquila a Gragnola. Castello dell’Aquila in Italian means the Castle of the Eagle. The castle is situated on a hill overlooking the medieval village of Gragnola and the entire eastern Lunigiana with a beautiful view of the Apuan Alps. The castle has been recently renovated.
Open to visitors with appointment. Bed & Breakfast. Info: www.castellodellaquila.it 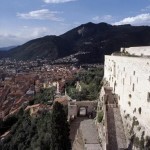 Castello Malaspina di Massa. It is one of the most significant military complexes of Italy. Massa‘s Malaspina castle has an interesting triple stratification: a medieval part, Renaissance palace and seventeenth-century gunboats. Together with the castle of Avenza (Carrara) it was the main point of defensive system of Massa and Carrara.
Open to visitors. 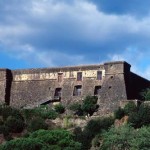 Fortezza della Brunella. The Fortress of Brunella is situated on a rocky outcrop at the beginning of the narrow gorges of the Val di Magra.
Open to visitors. Bed for pilgrims. Info: www.fortezzadellabrunella.it 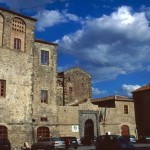 Castello di Terrarossa. The castle of Terrarossa is perhaps the largest among all the castles of Lunigiana. It was built in the XVIth century by the Malaspina family as a residence and a control point of the Via Francigena (pilgrims road). The castle has been renovated, you can find there a showroom dedicated to local products and wines.
Open to visitors. Info: castelloditerrarossa.blogspot.it 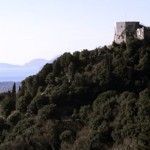 Castello Aghinolfi, Montignoso. The Aghinolfi castle is located in a strategic position on the Tyrrhenian coast, between Liguria and Tuscany, along the Via Francigena, and along the ancient roads from Portovenere to Livorno. Today the castle is restored, with an interesting archaeological display.
Open to visitors. 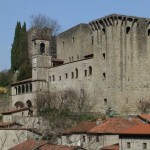 Castello della Verrucola. The Verrucola Castle is one of the most important and most impressive castles in Lunigiana. Once the property belonged to the Malaspina family. The castle was recently restored.
Open to visitors on with appointment (0585 92466, 0585 92444). 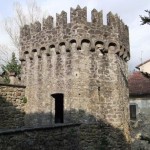 Castello di Filattiera. The castle was built by the Malaspina family. Now the castle is private property.
Open to visitors only with appointment.

Castello di Lusuolo. Lusuolo is an important example of a fortified village connected to the the castle on the top of the hill.
Open to visitors.

Castello di Pontebosio. The castle of Pontebosio was built as a rustic palace in the XVIIth century. The castle has a square plan with four square towers, and two covered loggias placed in the top of the central body.