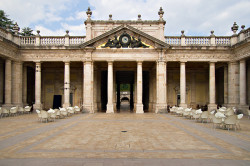 Tuscany in winter is tempting and different. Here you can have a New Year’s Eve celebration and immediately after – plunge into a bargain fever. Travelling around Tuscany in winter is a great opportunity to see the fascinating cathedral of Florence, the leaning tower of Pisa or to participate in the hilarious Viareggio Carnival. And those who miss warmth in winter are invited to Tuscan thermal pools.
Tuscany is an Italian region that is richest in underground thermal waters. Thus it is not surprising that warm and healing springs were well-known since ancient times: the Etruscans used them exclusively for therapeutic purposes and the Romans – as places for meetings and resting. So take a journey to warm up in thermal waters, bubbling up in Montecatini Terme resort near Pistoia city. 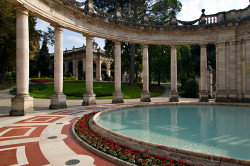 The history of Montecatini Terme distinguishes it from all other thermal resorts that are found in the region. The area has been inhabited since Palaeolithic times. The therapeutic properties of Montecatini Terme were already known in Roman times. First thermal pools were established in the 16th century and received the name of Medici. At the turn of the 19th and 20th centuries, Montecatini Terme was attended by composer Giuseppe Verdi, Rossini, Strauss, famous writer and Nobel Prize winner Luigi Pirandello, in 1930s it was visited by Benito Mussolini and in 1957 – by Christian Dior. Therefore Montecatini has been one of the most famous thermal resorts in Italy during many years. 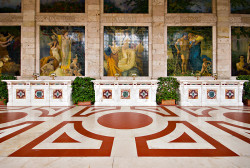 Montecatini Terme along with Tettuccio Spa Centre that is regarded as the symbol of all thermal centres, are the oldest and the most beautiful ones. The interior reminds of the Roman and the Renaissance epochs: colonnades, frescoes, marble, mosaics and outdoor pools, shiny crystal chandeliers and stucco ceilings. Tettuccio thermal complex and hotel are the oldest in the city; they are sometimes even called ‘the temple of the European thermal centres’ not only for their surprising architecture, but also because of the unique composition of thermal waters.

Grotta Giusti (English: Giusti Grotto) is a part of Monsummano Terme, famous for its steam baths and hot caves. This grotto, stretching over 200 meters underground, is naturally created. Here you can admire dark and mysterious tunnels, covered with stalactites and stalagmites. In Giusti Grotto hot underground water springs produce clouds of warm steam and thus create a natural sauna with body cleansing effect. The air temperature varies from +31°C to +34°C and the temperature of natural water pond is +36°C, with the humidity of 100%. 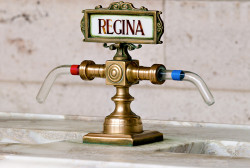 For those who are not willing to spend an entire weekend in thermae, Montecatini and its surroundings may offer a variety of attractions: from the Pinocchio Park near Pistoia, Osservatorio Astronomico della Montagna Pistoiese, skiing or trekking on Mount Abetone or Montagna Pistoiese to food degustation. Almost all inns offer dishes with ceps, roasted chestnuts, pork in oil, popular sheep’s milk cheese of Pistoia, called Raviggiolo, lots of syrups, jams and wild berry confitures. All these goods can be also purchased in morning markets.

Book your hotel in Tuscany by clicking the link below.