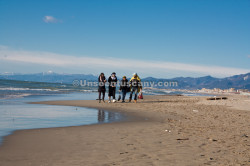 Versilia is a part of Tuscany in the north-western province of Lucca, and is named after the Versilia river. Versilia is known for fashionable Riviera resorts, it consists of numerous clubs that are frequented by local celebrities. But probably the most important characteristic is the best Tuscan beaches.

Lido di Camaiore. Lido di Camaiore is located in a quiet zone on the sea between Viareggio and Marina di Pietrasanta. Lido di Camaiore spreads out for more than 4 km along a coast and it is famous for its wide beach with its fine and golden sand and for its inland. The seaside equipment is the most modern and functional.

Viareggio. Viareggio is one of the most famous resorts in the Versilia and the largest beach town in Tuscany. It’s famous for the Carnevale di Viareggio, which attracts a million visitors every February, and Liberty-style architecture, and its stunning beaches, boats and yachts. Beaches of Viareggio are almost all paid. Lots of seaside restaurants, summer nightlife, and shopping here.

Torre di Lago Puccini. Torre di Lago Puccini holds a summer Puccini festival with operas, concerts, and ballets performed in an open-air theater by the lake. The lake itself is a peaceful vacation spot and Marina di Torre del Lago on the sea has a top gay beach.