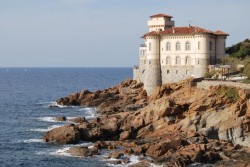 The seaside along the province of Livorno very often is called as an „Etruscan Coast”. It is one of the most interesting seaside areas in Tuscany. There are many traces of Etruscan heritage, transparent sea, ancient villages located on hills, natural parks, one of the world’s most famous wines and delicious seafood cuisine. The province of Livorno includes some of the most famous and best Tuscan beaches.

Livorno. The beaches around the city are very often called as the best and most beautiful beaches in all Tuscany. The main characteristic of beaches of Livorno – rocky coast, also under the water, the coast is perfect for diving.

Quercianella. A famous scenic coastal road runs from Livorno to Quercianella along the Romito, passing high cliffs and limpid waters, a paradise for fishermen, diving and snorkeling lovers. The characteristic resorts are equipped with modern facilities. The rocky coast of Quercianella is surrounded by beautiful villas built during the XIXth and XXth century.

Castiglioncello. Castiglioncello stands on a promontory, surrounded by pinewoods and hills that fall right down to the sea forming cliffs, little inlets, coves and sandy beaches. Castiglioncello has been a renowned sea resort since the 19th century. Nowadays Castiglioncello is surfers’ paradise, especially at the so-called “Rocky point”.

Rosignano Solvay. The location is rich in bathing facilities, and it is perfect for those who are searching for relaxing and peaceful holiday. The marina Cala de‘ Medici is one of the most important in the area with 650 boat places, the yacht club and the sailing school.

Vada. Vada is famous thanks to its white sandy beaches and azure waters that reminds a little tropical paradise… There are both private beaches as well as large public beach, all surrounded by green pine woods. Vada is both relaxing and exciting, and there are many activities open to tourists, in particular sailing.

Marina di Cecina. Cecina offers to visitors a dense pinewood and 15 kilometers of sandy beach. In Marina di Cecina, the sea is incredibly clean and highly accessible. There are both private beaches as well as public beaches. Marina di Cecina is a mix of relaxation and things to do.

Marina di Castagneto. Marina di Castagneto has a clean, wide, sandy beach and clear water. It is surrounded by pine trees and Mediterranean scrub. There are both private beach with modern bathing facilities and public beaches called “Punti Azzurri” with basic facilities provided. This is an excellent spot for disciplines like windsurf and kite surf which require strong winds and a calm sea.

San Vincenzo. Wide beaches of fine, pale sand run for many kilometers, alternating public and private beaches. The sea water is crystal-clear, the limpid air and light sea breezes make aquatic sports more enjoyable. Dotted along the coast are a number of lookouts and old fortifications, including the ancient San Vincenzo Tower, which were once used to defend the coast against attacks by pirates. San Vincenzo is a well-known international tourist destination where relaxing holidays can be enjoyed all year round.

Golfo di Baratti. Baratti with its unspoiled nature is ideal location for tourists seeking a coastal retreat. There is a little tourist harbor and possibilities to go diving and snorkeling. At the port stands the fifteenth-century Baratti Tower.

Piombino. The town of Piombino is located in front of Elba Island and at the northern side of Maremma. The surroundings of Piombino is dotted with fine sand beaches and numerous bathing establishments. Piombino‘s pinewood costal area is well-known for its entertainment, bars and restaurants.