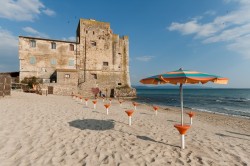 Torre Mozza can be described as a place between legend and truth, one of the best Tuscan beaches in the Gulf of Follonica. The secret of Torre Mozza is a coastal fortification and an old Roman road, both rinsed with the crystalline clear water of the Mediterranean Sea.

The tower of Torre Mozza was built by the Lords of Piombino, the Appiani, around 1500, as a defensive tower to oversee the arrival of minerals from Elba Island. It was later made into a dock, and during the last decades of the XXth century the structure was a restaurant. Currently it is being restored is currently being restored with the aim of turning it into a hotel.

About ten meters from the shoreline, emerges an old Roman road that is now partially submerged. This antique road is supposed to be part of an ancient route of the Via Aurelia, but the historians are discussing if it’s a legend, or is it really.

The beach of fine sand and dunes, is free. It is also very extensive, but during the summer could be very crowded (therefore, to go early in the morning to find a better place). The Roman road creates a kind of natural pool, and protects it from waves and undercurrents. Thus the water is warm, and the sea fauna is visible. The seabed is sandy and deepens very slowly. The Torre Mozza beach is surrounded by a green pinewood where you can take a break from the heat on the beach. Next to the tower is also located a bar, restaurant and private beach.

This fascinating place is worth your visit, for a dip in the blue sea and the Torre Mozza tower that oversees the horizon.