Bolgheri Wine: the Best Wine in The World 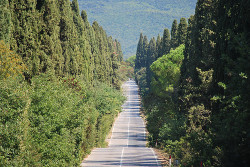 This is the first verse of the poem Davanti a San Guido, written by the poet Giosuè Carducci in 1874, because the first thing he noticed on the road to Bolgheri were these two endless lines of cypress. They are still there, and you can feel entering into a place out of time, where amazing things can happen. So today I want to tell you about the vineyards around Bolgheri, where are born some of the most famous wines in the world. 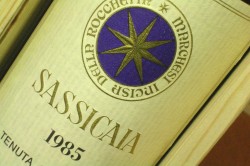 Let’s start with Sassicaia, maybe the most famous Italian red wine. The first bottles of this wine are dated 1968 and just few year later it was already known by all the people who care about good wine. The price of Sassicaia depends mainly on the vintage, like all high quality wines. It is produced by Tenuta di San Guido, where you can find also other very good quality wine but with a bit less price like Le Difese or Guidalberto. My personal pick is for Guidalberto: refined for 15 months in barrique and 3 months in bottle, is a fantastic example of superior Bolgheri wine, with a perfect balance. 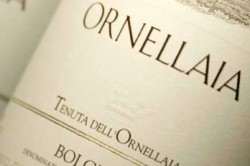 Togheter with Sassicaia, the other “big shot” from Bolgheri is Ornellaia. Made in Fattoria dell’Ornellaia from 1981, I don’t need too much words to describe it: it‘s enough to say that in 2001 Wine Spectator declared vintage 1998 Ornellaia Wine of the Year. If you are not well documented I do not recommend to buy high price wine: as I wrote, the price depends a lot on the vintage and you risk to pay a bottle two times its price, or even more. A more affordable wine from Fattoria dell’Ornellaia is Le Volte, anyway a good choice if paired with fiorentina steak! 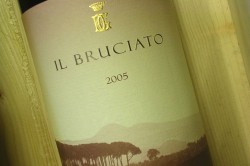 Aroud Bolgheri there is also an estate of Marchesi Antinori: Guado al Tasso, with its same named flagship wine. The first Guado al Tasso vintage was the 1990, but it became famous very fast. Made blending four types of different grapes, this wine is still a bit more affordable then Ornellaia and Sassicaia. Speaking about the estate Guado al Tasso, my special mention goes to Il Bruciato, described by Antinori like “the younger brother of Guado al Tasso, with more contemporary style”. As its name calls, Il Bruciato (literally “the burned”) release some lighter notes of licorice and coffee, that make this wine unmistakable even for those who are not sommeliers. Il Bruciato is, in my view, one of the best wine compared with its price. 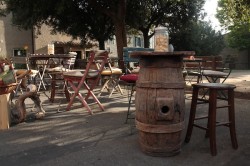 There are many other wine makers around Bolgheri, like Le Macchiole, Michele Satta, Grattamacco, and so on, everyone with its particular blend but in the end, the common point of all red wines from Bolgheri is that they come always with intense ruby color and with a very important aging ability. It’s a result f mixing various types of the grapes: Cabernet Sauvignon, Cabernet Franc, Merlot, Syrah, Petit Verdot and Sangiovese.

Finally, my advice is to go to Bolgheri, and choose an “enoteca”, and try some glasses of different Bolgheri’s wine while you feel the atmosphere of the medieval village and its surroundings. If you will come to Bolgheri on july or august, don’t miss the famous music and theather festival “Bolgheri Melody”.

Read more about Bolgheri and the festival here.