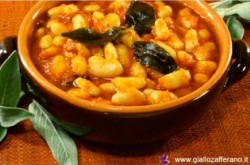 Today on our weekly chapter of Italian Recipes we offer you to try authentic italian recipe of Fagioli all’Uccelletto beans. The baked italian beans „Fagioli all’Uccelletto” are one of the typical dishes of Tuscany, especially Florence, a city with an ancient history and old gastronomy traditions. The fame of this recipe is mainly linked to the simplicity of its ingredients and its intense flavor but delicate at the same time, which makes it a great accompaniment especially for meat.
Although „Fagioli all’Uccelletto” is well known, no one has ever been able to understand the meaning of the name (english: little bird beans) , as in the recipe of birds there is no trace. The only one who has tried to give an answer to this question was the father of Italian cuisine, Pellegrino Artusi’s argument that the recipe would take its name from the method of cooking, with particular aromas, used for the preparation of the famous roasted birds.

• First cook fresh beans ( you must pay particular attention doing it): put the beans in a pan, preferably terracotta, and cover with four inches of water. Bring to a boil very quickly and then lower the heat and let the beans simmer until they will be tender but not falling apart.
• Once the beans are ready, fry in a pan, (always terracotta), with a bit of olive oil, garlic and sprig of sage.
• After two or three minutes, add peeled tomatoes and cook everything until you get a fairly thick sauce.
• Then add the beans, which had previously prepared, add salt and pepper according to your taste, then simmer for at least 15 minutes.
• Once the dish is ready serv still warm.